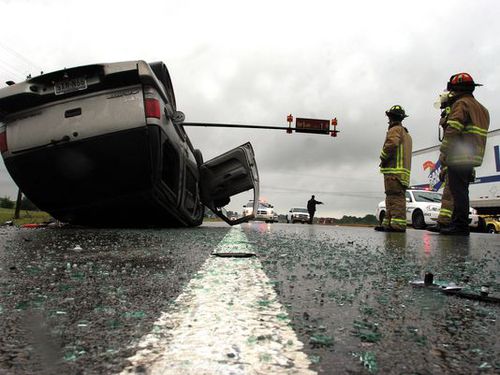 Snow and ice are not the most deadly driving hazards. Turns out it's rain.

A new analysis of federal data shows that rain causes more driving fatalities than snow in 39 of the 50 states.

In fact, car accidents are the deadliest weather hazard in the United States — whether caused by rain, snow, fog or wind — and kill about 7,000 Americans a year.

The Auto Insurance Center compiled the report based on National Highway Traffic Safety Administration data that covered all U.S. fatal car crashes between 2009 and 2013. The report, published this week, pinpointed the causes of deadly weather-related crashes in each state.

The study also noted that far more people are still killed as a result of reckless driving, speeding and drunken driving.

"Even though winter conditions do generate their share of accidents, wet conditions are generally more common in many areas. And drivers are often less cautious than they might be with winter conditions," said James Koermer, a meteorology professor emeritus at Plymouth State University in New Hampshire, who was also not involved in the report.

Sheldon Drobot at the National Center for Atmospheric Research in Boulder, Colo., agreed. "Rain is always a surprisingly high factor," he said.

Drobot, who also was not part of the study, pointed out that first, Southern states get more rain than snow. "Second, rain can make roads rather slick, especially if it hasn't rained in a while and oil residue builds up. Third, rain can impair visibility, leading to trouble," he said.

Even Alaska had more deadly crashes because of rain than snow.

In North Dakota, snow and rain caused an equal number of fatal crashes, the study said.

The study also found that fog leads to a high number of fatal crashes in the South and far West.

"Fog in the southern tier of states can frequently be quite dense in patches, so when drivers suddenly encounter these areas, they cannot see that the vehicles in front of them have slowed significantly or come to a stop," Koermer said.

The Auto Insurance Center report concluded: "It doesn't take extreme conditions or intentional recklessness behind the wheel for tragedy to strike. Scary as it sounds, the factors to blame for the worst outcomes on the road are pretty common."

At Prime Insurance Agency, we can work with you to make sure you've got the coverage you need, while at the same time using all possible credits and discounts to make that coverage affordable.